FedEx Ground Manager of Safety Programs and Response Michael Sear recently admitted under oath that about 40% to 50% of all FedEx Ground semi truck accidents causing injury or death are preventable.  Sear made the statement in a sworn deposition in Albuquerque on September 24, 2015. Sear was asked the following question:

"Can you tell me, based on your knowledge of the preventability work that you do, approximately how many or what percentage of FedEx Ground accidents involving injuries or fatalities are classified as preventable?"

"I would guess that the last that was looked at, and this is a guess, between 40 to 50 percent."

Crash records kept by FedEx Ground show that there were 878 semi-truck crashes causing injury or death over a three year period from 2008 to 2011.

That means that about 440 semi truck crashes were preventable but could have been easily avoided had the FedEx Ground driver taken steps to reduce risk. In these specific crashes the FedEx driver failed to meet the higher standard of performance required of tractor trailer drivers. 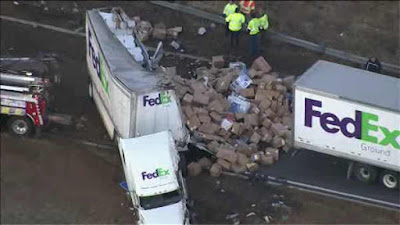 What is a preventable semi-truck  crash?

The Federal Motor Carrier Safety Regulations (FMCSR), Appendix A to Part 385 defines truck crash preventability as follows:  "If a driver who exercises normal judgment and foresight, could have foreseen the possibility of the accident that in fact occurred and avoided it by taking steps within his/her control which would not have risked causing another kind of mishap, the accident was preventable"

The American Trucking Association's Guidelines for Determining Preventability of Accidents defines preventability as follows:  "The concept of preventability is based on the premise that a professional driver is expected to meet a higher standard of performance than the average motorist.  It is self-evident that the professional driver should be able to observe and assess the behavior of pedestrians and other drivers and recognize those actions which may create hazardous conditions and take every reasonable measure to avoid involvement in an accident."

What must FedEx do to reduce preventable semi-truck crashes?

According to nationally known truck industry safety expert Lew Grille, FedEx does no training of their drivers after they are hired, and this contributes to increased preventable semi truck crashes.

FedEx managers have themselves stated that they do not provide any training to their semi truck drivers. The do not train their drivers in the industry approved Smith System of commercial driving. They do not offer fatigue training, night time driving training or any continuing truck driver training. They only certify that their drivers have a Commercial Driver's License.

FedEx failure to provide fatigue training or night time training to their semi truck drivers resulted in the death of at least 3 people in New Mexico in 2011 alone.

Two members of the Morga family were killed and one severely injured in a 2011 crash on Interstate 10.  The FedEx Ground semi truck driven by Elizabeth Quintana crashed into the rear end of the Morga vehicle. A Santa Fe, New Mexico jury awarded $165.5 million to the Morga family.

Martin Leon was killed in a 2011 crash on Interstate 40.  He was a FedEx co-driver who was asleep in the sleeper of the tractor when his co-driver Fderico Martinez-Leandro crashed into the rear end of another vehicle.   Martinez-Leandro was cited by authorities for his improper driving. A lawsuit filed by the family of Martin Leon has been filed against FedEx and Martinez-Leandro and is pending in US District Court for New Mexico.

Attorney Mark Caruso has been directly involved in the litigation of both cases. For further information about Mark Caruso see www.NMTruckAccidentAttorneys.com or www.CarusoLaw.com or 505-883-5000

Posted by Unknown at 9:06 AM
Email ThisBlogThis!Share to TwitterShare to FacebookShare to Pinterest